Colin is the current Chair of WinZero.  He studied at Sydney University – Bachelor of Economics, and also has a Diploma in Education.   After some time as a Primary Teacher in Minto, Colin became an Adult Literacy Officer at Liverpool TAFE.  In this position he worked with the Aboriginal community in Western Sydney to help them gain literacy skills.

Colin is currently a partner in Balmoral Pottery studio assisting in the making and teaching program with his wife, Sandy Lockwood.

Clive was born in England and migrated to Australia when he was 11 years old.   He studied economics and law at Monash University before moving to Washington for his Master’s degree in US Government Procurement Law.

In Canberra, he worked in the Attorney-General’s Department for many years, specialising in major projects and when living in Paris for some years he worked in the legal department of the OECD’s Nuclear Energy Agency.

Clive is a member of the Austral and Boral community committee. He is also active in Bushcare and Landcare and has been an advocate for global warming due to its impact on biodiversity.  Clive believes that it’s important for communities to come together to protect our environment.

Derek was born and raised on a sheep property in Western Queensland. He was educated at the University of Queensland where he studied mining engineering. He then went to work for Mt Isa Mines as a Mining Engineer before progressing into management positions with Delta Gold, GMA Garnet and Pacific Precious Metals.

Derek is an avid tennis player who has played competitively since his childhood days on the family farm. He has also been actively involved in community affairs including nearly 20 years in Rotary at Board level

Richard Krohn’s earlier years were spent in England and South Africa before moving to Australia with his family in 1988. Richard has had a variety of jobs with Kodak in several countries throughout his career, including manufacturing quality control and sales management.. Before leaving in 2001 he was Marketing Director for Asia Pacific Eastman Kodak.
He enjoys international traveling, walking and family. He has been an active member of the Southern Highlands Community as a past president of Berrima District Rotary Club, Past Chair, SH Youth Hub Task Force and Past President, Management Committee, Highlands Community Centres Inc

Gaye White spent her early life on the Gold Coast where she witnessed cyclones and extreme floods and beach erosion.  She has resided in Brisbane, Mt Isa as well as Sydney and now lives in the Southern Highlands.  A teacher by profession, her work has included teaching at Yarrabah Aboriginal Mission, School of the Air in Mt Isa, East Sydney TAFE and adult education at University of Western Sydney.

In 2008 Gaye was CEO for the Dot Com Mob which is a charity that aims to provide internet access for Indigenous communities members while also improving their digital literacy skills.

Gaye’s passions include bush regeneration and her native garden; she even manages to find time to paint every now and then!

Colin Todd's Story For the last 40 years I have been living in Balmoral Village on a 5-acre bush block ...
Read More

A Conversation with Miles Lochhead

Miles Lochhead Coffee has become an essential part of mornings and certainly we’ve developed the habit of offering it as ...
Read More

People in the Southern Highlands Background I grew up in the countryside, running around the back blocks of Queensland playing ...
Read More

Maree Byrne was awarded OAM for service to the community of the Southern Highlands When I email Maree suggesting a ...
Read More 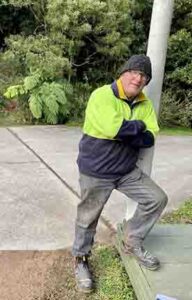 Here is his story. Michael Meldrum, the last Convenor of CANWin before it melded with WinZero, is quick to assure ...
Read More