Here is his story.

Michael Meldrum, the last Convenor of CANWin before it melded with WinZero, is quick to assure me that he is not a local hero. Neither, he tells me, is he an environmental warrior. According to Michael, he is a pretty ordinary bloke who just stepped up when Miles Lochhead had done his stint because, through his love affair with a small plot of Yarrawa Brushland perched above Macquarie Pass, he has learned the immeasurable value of the natural world. With his heart in the Yarrawa Bush and his clever head full of engineering training, the skills and ability he brought to CANWin lay in the area of sustainable energy for the local area.

Michael feels he has been fortunate in life and clearly he has made some excellent choices, top of the list being his partnership with longtime wife, Barbara, and their decision to live in the Yarrawa Brush where they nurture a plot of recovering land with wide views and wondrous vegetation.

In order to establish how and when Michael landed in this place, I started at the beginning and asked him about his childhood.

Michael was born in Hay, but early in his life he and his mother moved to Renmark to live with a much-loved great aunt. His mum worked locally, picking fruit to earn enough to sustain the little family group. These were hard times and she worked long hours. This took its toll on her, and following  a prolonged illness, the pair moved to Sydney.

Due to family circumstances, Michael boarded out with foster carers during his young life. In listening to him talk of these times, it quickly became clear that, for Michael, the experience of living in foster homes had been a positive one. With a cheeky smile, he described being one of sixteen kids living with a wheelchair-bound carer who specialised in huge pots of porridge which the seventeen of them would consume together.

“It was great fun!”, Michael told me.

When the inspectors came to check on the household, the carer would order some of the kids out into the garden to hide in the shed until they left!

This placement was followed by a home with a more conventional family in Kogarah Bay. Again, this situation was peopled by kind and well-meaning people. His enterprising and clever mother visited as regularly as she could, helping with the chores at the homes on weekends. She kept up a loving and supportive relationship with her only son, as well as quickly climbing the ranks in the world of work, ultimately being appointed as an Investments Manager in the early 1960s. As a capable and valued employee, she was granted a housing loan. This was almost unheard of for a single woman at that time. The loan enabled her to buy a cottage in Arncliffe and there Michael and his mum lived happily until the early 1970s when he moved to attend university in Newcastle. There he studied engineering.

More stories followed, describing what sounded like pretty typical adventures for a young, male uni student of the time. On a notable occasion Michael attended a house party,  “Someone knew a nurse…”  where he met his future wife, Barbara. The purchase of a first car seemed to be an essential adjunct to this relationship and it must have devoured most of Michael’s funds as he described dropping Barbara home after evenings out together then driving around the corner to sleep in his car before popping back around the corner and returning to the family home for breakfast the next morning.

“It didn’t take them long to work out what was going on.”

After Michael and Barbara married, engineering work placements took the couple to Kembla Grange. With degrees in mechanical engineering and post grad science and management degrees under his belt, Michael worked for thirty five years with Metal Manufacturers Ltd. He and Barbara bought a home at Mt Warrigal on the east side of Lake Illawarra and they remember happy times there. They loved the area and the neighbours but the complexion of the place changed when many of the permanent residents moved away and houses were sold and rented out.

During this time, whilst Michael had heavy work commitments, Barbara’ s sister bought a little piece of land in the Hunter. The rural lifestyle had immediate appeal for Barbara and Michael and it wasn’t long before the couple decided to seek out their own piece of bushland.

Sitting with Michael after a walking tour around their astonishingly beautiful property, it was easy to see why he had become passionate about protecting land from development and preserving the wonderful plants and wildlife of the area. Being an engineer, he ‘is right into’ renewable energy. He continues to work with Miles and others in an energetic team working on projects involving grouping together properties for community solar projects.

Clean Energy workshops were organised by CANWin and at a wind farm day he met neighbours David and Helen Tranter, highly-qualified scientists with a common love for the Yarrawa Brush and a long history of commitment to preserving the local environment.

As I drove away from the property, winding up the U bends towards The Pie Shop, I reflected on good fortune of these precious pieces of land falling into the hands of people like Michael and Barbara who are attuned to their wonder and committed to their preservation.

Thank you, Michael, for your contribution through CANWin towards a sustainable future for our local area and for allowing us to peep into your life to find out what makes you tick.

You are hero enough. 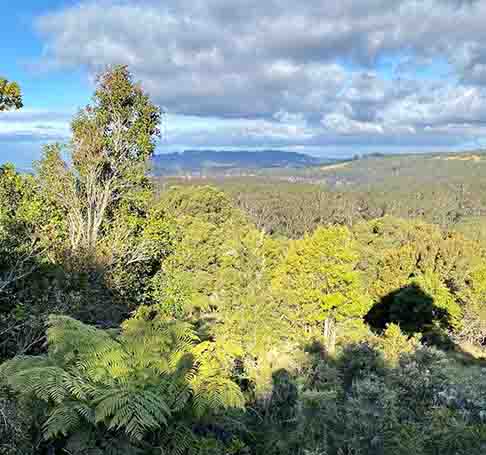