Thank you to all the people who came along to  Earth Hour at the Southern Highlands Botanical Gardens and  were amongst   the first people in Australia to see the BYD Han EV at the WinZero Stand.   The BYD HAN which will be imported from China next year by Nexport which is part of the TrueGreen Group.

WinZero also thank you to the  enthusiastic members of the Tesla Fan Club who brought along a Model S, Model X and Model 3 and stood by their cars for hours to answer lots of questions.   Our very own WinZero member, Derek White, had his Hyundai Kona on display.

Started by WWF and partners as a symbolic lights-out event in Sydney in 2007, Earth Hour is now one of the world’s largest grassroots movements for the environment.

Thanks to Mike Levin, from True Green, for being available to answer many of the questions.

TrueGreen Mobility, a subsidiary of the TrueGreen Impact Group, will be importing the new 2021 model Right Hand Drive BYD HAN, and a range of EV SUV’s and Commercial vehicles from early 2022, with orders being taken from July this year.

“We are inspired and heartened by the feedback we have received from within the Southern Highlands Community generally, and in particular the number of people who are interested in embracing clean, green technology, including our soon to be available range of beautiful, and attractively priced EV’s. We hope to be able to convince Local Government, and Small / Medium Businesses in the Highlands, to progressively move to the operation of EV Fleets, and we are planning to make that transition an attractive proposition, through the use of an innovative finance offering” Mike Levin, Relationship Manager TrueGreen Impact Group.

This Earth Hour, we encouraged people everywhere to make the #SwitchforNature to support Australia’s switch to a renewables-based economy.

Simple switches you make in your daily life can help our planet. You could:

Thank you to all the people who made a pledge.  The winner of the #switchfornature draw was Pete Thorne.  And thank you to our fabulous WinZero Volunteers. 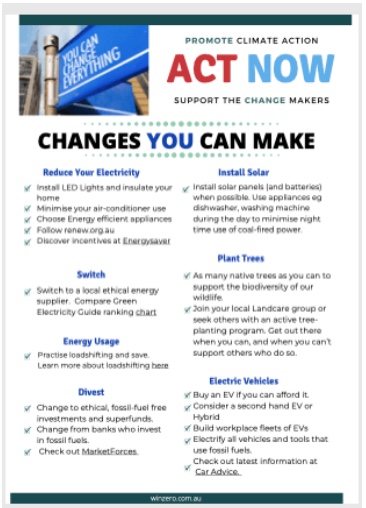