Given the vast range of things we have to worry about these days, this could be said to come in low on the scale, but I need to let you know that presently, I’ve got it in for toothpaste.

How does this compete with worries about Covid19 and saving the planet? I hear you ask.

When I hear that word it has an American accent. I’m rocketed back to the 1967 film, The Graduate. (They weren’t called movies back in the times before our Australian star was slavishly hitched to the Stars and Stripes They were called films). Who could forget the fishnet-stocking-clad Mrs Robinson?

In the story, a young man who was hopelessly trapped in the clutches of this marvelously-skilled seductress, Dustin Hoffman’s character, Benjamin, was at a point in his life when he seemed to need career advice. At a poolside party (I think it was poolside – anyway it was in one of those jaw-droppingly extravagant houses the Americans do so well) a millionaire businessman (not billionaires back in the day) sidled up to Benjamin and whispered to him,

‘I want to say one word about careers to you, son.

Armed with what we now know about ‘plastics’, we can safely assume that, together with zillions of other Benjamins, this young man likely went on to a career that made him a bucketful of money as well as filling planet earth with such volumes of this terrible stuff that we are in danger of poisoning our human selves, as well as being well on the way to destroying most of the natural life on land and in the sea.

How does this relate to toothpaste? The stuff used to come in tubes made of something that looked and behaved like …lead. Eeeek! Maybe it was lead!

Anyway, here is my Gripe No 1.

In the olden days, as the tide went down inside the toothpaste tube, you could squeeze and squash, forcing every last bit of toothpaste up towards the little nozzle at the top til it shot out in a messy, extruded snake. This opening wore a tiny, easy to grasp, hexagonal cap that you screwed back on (well some of us did…) when you had finished squeezing.

But these days, toothpaste tubes are made of plastic of a thick, squash-resistant type. This means that it is all but impossible to get the last remnants of the stuff to stay up near the exit hole where you can capture it. Though you hurt your fingers trying to trap it near the hole, the tube is cleverly designed to ensure that it is sucked back down into the nether regions as soon as you release finger pressure. In frustration, you throw it all away, thereby wasting lots of toothpaste and being forced to buy more plastic.

Feeling cross, I took time out to devise a strategy for getting the last snakey squiggles out of the tube. For the good of the planet, and, so that we can steal a march on marketing folk, I will tell you how this works. Put on a pair of hard-soled shoes and lay a towel on the floor. Put the tube on the towel and carefully tread the recalcitrant remains of toothpaste up towards the hole. Don’t let go! When you have it all trapped up top, put the tube on the bench and fold the tube up from the bottom. Grab a bulldog clip and clip the tube so that it can’t unroll and suck the wretched stuff back down into the tube.

Gripe 2 is about caps. Toothpaste tube caps have turned into a huge, flat-topped affairs designed so that we can stand the tube on its end. This would make sense the toothpaste ran down inside the inverted tube ready to come out the hole next time you squeeze – but it doesn’t – its too claggy. The monster cap just looks fancy and uses about ten times the amount of plastic. Its supposed to make you believe it will look classier in your bathroom and trick you into thinking that you will be able to use all the toothpaste right to the last endy bits. Not so!

Gripe no 3? The whole business comes in a shiny little cardboard, tube-shaped box.

Well here is another big trick pulled on us by marketing people.

Those shiny white boxes with sparkly lettering also have a planet-destroying secret. It was revealed to me when we lived with a bathroom that had a leaky U bend under the handbasin. Unaware of that leak issue, I stashed spare boxes of toothpaste in the cupboard below the basin and when I reached for a replacement tube, out came a sogged-up box that gave away the big deception. The box is sure enough cardboard, but all that shiny outside covering is a layer of stuck-on plastic. If you don’t believe me, soak your next box in water overnight and you will find that a whole skin of plastic peels off, leaving you with a soggy mass of cardboard to deal with and a conscience that tells you to take the plastic to the supermarket soft plastic collection point and make some sort of sensible decision about the wet cardboard.

I know you will hate me for telling you this because now you, too, will have messily soaking toothpaste boxes cluttering up your bathroom and explanations to make as to why this annoying activity is now necessary.

Also, instead of hastily grabbing any old tube of toothpaste off the supermarket shelf, you will find yourself searching for toothpastes that come in boxes without the shiny plastic covering and tubes that uses way less plastic. There are some.

If all this info causes ructions to long and beautiful relationships with people you share your house with, my apologies in advance. 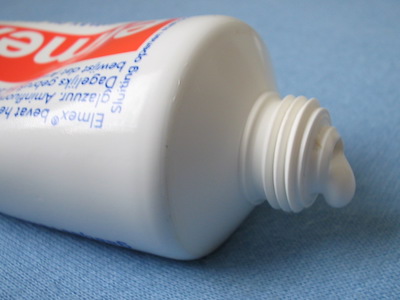